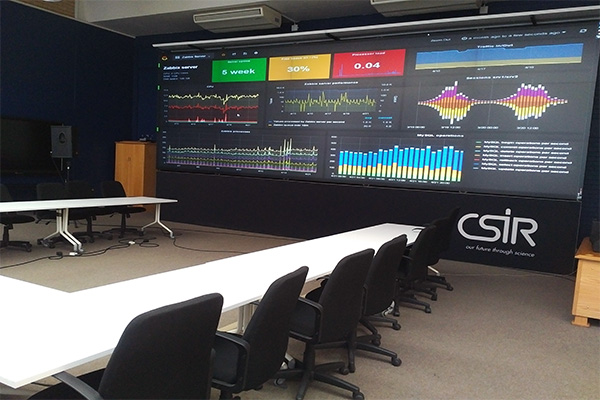 Disclaimer: No actual content from the CSIR was displayed during photography. Permission was sought prior to publication of images.

The replacement of the LED light source and cooling units is recommended after five years of operation on the OL series Barco videowalls.

The new generation-3 LED chains which were installed represents the latest in LED chain technology, and is considered to be an upgrade from the original generation-2 devices originally supplied with the videowall.

In addition, all fifteen cubes had their liquid cooling units replaced to allow for optimum cooling of the redundant LEDs and internal electronics.

Once all the LED chains and cooling units were replaced, an image alignment and colour balance was performed to ensure that any content displayed over the entire 15 screens appeared uniform.

The entire operation was completed within three days.